The Affluence Investment Fund has continued to perform well despite what has been a particularly difficult investing market over the past 6 months. The graph below illustrates this point rather well we think. 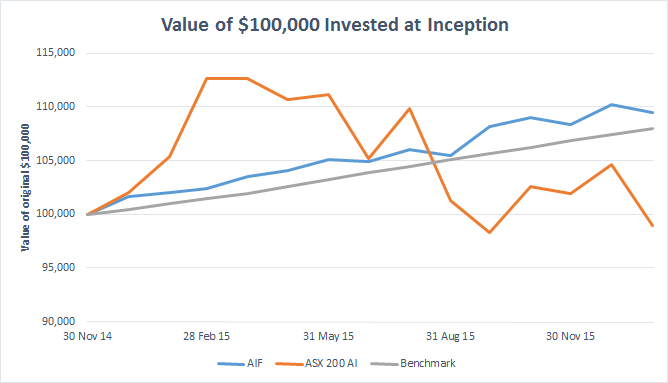 While the Australian stock market including dividends lost 5.5% in January, the Affluence Fund fell just 0.7%. Over the past 12 months, the results are even more stark, with the Affluence Fund up 7.3% and the Australian stock market down 6.1% including dividends. That’s over a 13% difference. It’s still early days, but we remain encouraged by the result to date and the performance of our underlying managers, particularly through this difficult market.

The most pleasing aspect of our January performance was that all but one of our unlisted fund investments performed better than the market. This continues to give us comfort that our strategy of picking downside winners is appropriate.

Experts are currently polarised between “buy now” and “panic…it’s a fully-fledged bear market”. Nothing new there. We don’t know the answer, but we have now seen falls of over 20% since the top in April last year and it feels like we are overdue a little more positive news. Sentiment appears awful and confidence low.

It’s worth bearing in mind the Australian stock market has dropped by more than 20% on 12 other occasions between 1974 and 2011. On just 4 of those instances, falls of greater than 40% occurred. Each of those events was preceded by significantly above average increases in market values, something we have not seen in recent times. On every other occasion, peak to trough losses ranged from 20% to 29%. Given this evidence, we are not convinced we are in the midst of a much larger correction, but should it occur we remain ready to deploy further cash as opportunities arise.

In early February, for the first time we took small positions in two listed hybrid notes. Registered members can read more about them here. It appears there are now some opportunities emerging in this space and we have commenced a wider review of the sector.  We have also increased our holdings in the listed options of various LICs. This provides us a very low cost access to upside if we do see a reasonable market recovery in the short term, while limiting the downside to a minimal amount.

With the further market correction in February, we are moving well into buying territory now. Please let us know if you would like to invest with us, or add to an existing holding. A reminder the cut-off for monthly investments is the 25th. If you know anyone else that may be interested in the Fund, feel free to let them know.

If you have not already done so, you can go here to register for access to premium content for Affluence Members only.

Are you looking to invest in the best LICs in Australia? The Affluence Listed Investment …

END_OF_DOCUMENT_TOKEN_TO_BE_REPLACED

Our Affluence Managed Funds Guide shows how we look for Australias best fund managers. A …

END_OF_DOCUMENT_TOKEN_TO_BE_REPLACED

Get free access to all our premium content including details of Affluence Fund Portfolios and profiles of Funds and LICs we invest in.

Get a monthly update on the Affluence Fund, profiles of some of Australia’s best fund managers and access to exclusive investment ideas.