Why We Recently Sold Some Gold Stocks

Home » Education » Why We Recently Sold Some Gold Stocks

Why We Recently Sold Some Gold Stocks

Late last year we identified gold stocks as the greatest contrarian play of 2016. We wrote about it here

As a result of this work, in December 2015 the Affluence Fund made a small investment in the Baker Steel Gold Fund. We expected we would double our money on this investment sometime in the next 3-5 years. But we didn’t know exactly when it would happen. And because the asset class had been so volatile in the past and could very easily have continued to fall by 20% or more, we limited the investment amount.

Sometimes you get lucky. We managed to time that investment almost to perfection. Sentiment and the gold price both rapidly improved from January 2016 onward. The value of the investment took off and by July 2015 we were up over 140% on the purchase price. The recovery was sharp and sustained, fueled not only by a 25% rise in the Gold price, but also by an almost total transformation in investor sentiment, from extremely bearish to extremely bullish. 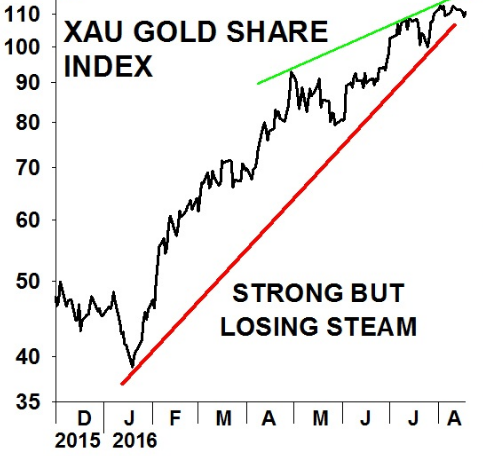 We recently decided to take some profits on the gold stocks investment. Here’s why:

Most telling of all though, we could see that traders and other speculators were holding record positions in gold and sentiment toward the metal was very near an all-time record. This implied that a significant amount of the recent price appreciation was due to momentum trading and we felt that prices had recently moved some way ahead of fundamental value.

It is important to note that we’re still believers in the long term trend. We do expect significant further upside in Gold mining shares in coming years. But the sector was looking a little too hot for us. And as the saying goes, nobody ever went broke taking a profit. So in July we redeemed half the Affluence Fund investment in the Baker Steel Gold Fund.

We replaced that holding in August with a small amount of exposure to oil and agricultural commodities such as wheat and corn which are currently at or very near to 10 year lows. We see plenty of upside in these and will write more about that soon.

The lesson to be learned from this experience is in the power of sentiment and market psychology to impact prices, both positively and negatively. Some extraordinary investment returns can be made when sentiment is extremely low and investors are at their most pessimistic. But you have to be able to do three things:

It’s hard to be a contrarian.

Want more of our insights and investment ideas? Go here to register for our monthly newsletter and gain access to premium content for Affluence Members only. Take charge of your financial future.

Are you looking to invest in the best LICs in Australia? The Affluence Listed Investment …

END_OF_DOCUMENT_TOKEN_TO_BE_REPLACED

Our Affluence Managed Funds Guide shows how we look for Australias best fund managers. A …

END_OF_DOCUMENT_TOKEN_TO_BE_REPLACED

Get free access to all our premium content including details of Affluence Fund Portfolios and profiles of Funds and LICs we invest in.

Get a monthly update on the Affluence Fund, profiles of some of Australia’s best fund managers and access to exclusive investment ideas.